Sometimes people get confused when it comes to telling how much memory the router has and which memory does what. There are 4 memory terms you should be familiar with, and 2 of these should be checked before upgrading the router’s IOS. These are the following:

ROM: ROM stands for Read Only Memory. It stores the System Bootsrap.
NVRAM: This is where the configuration is saved when you type copy run start.
RAM: RAM stores the running config, CDP information, ARP cache, routing table, etc. Basically everything the router needs for it’s operation. Before you upgrade the IOS you should check if the router has sufficient memory to run that particular IOS!
FLASH: This is where the IOS is stored. Before upgrading you should check if the flash is big enough to hold the old and the new images or that you have to delete the old one before downloading the new one.

To check the memory type in show version

6144K/2048K: This is the amount of installed memory (RAM or DRAM). DRAM is divided logically so you need to combine the two numbers to determine the total memory. 6144+2048=8192K.
32K: NVRAM to save the configuration file. It appears to be very small but because the config is just a text file it can hold a huge amount of data. Even this tiny 32K can store about a 1000-1500 lines of code! It’s handy to know thought that if you need more space to store your startup configuration you can configure the router to store it on the flash or boot from a TFTP server.
8192K: This is the size of the flash memory where the IOS is stored.

Let’s say we want to upgrade this Access Server. It is currently running c2500-i-l.121-3.t and we want to upgrade to c2500-is-l.122-8.T. First we have to check the IOS requirements on the Cisco Feature Navigator site to see if we have enough RAM and if the image would fit on the flash. 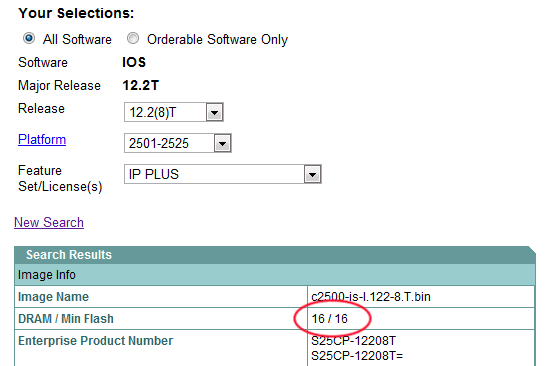 We can see that both, the RAM and the flash have to be 16MB/16MB in order to be able to use this IOS. We have only 8MB of RAM and 8MB of flash so the upgrade is going to have to happen after a quick shopping on ebay! :)

This site uses Akismet to reduce spam. Learn how your comment data is processed.

This website uses cookies to improve your experience while you navigate through the website. Out of these cookies, the cookies that are categorized as necessary are stored on your browser as they are essential for the working of basic functionalities of the website. We also use third-party cookies that help us analyze and understand how you use this website. These cookies will be stored in your browser only with your consent. You also have the option to opt-out of these cookies. But opting out of some of these cookies may have an effect on your browsing experience.
Necessary Always Enabled
Necessary cookies are absolutely essential for the website to function properly. This category only includes cookies that ensures basic functionalities and security features of the website. These cookies do not store any personal information.
Non-necessary
Any cookies that may not be particularly necessary for the website to function and is used specifically to collect user personal data via analytics, ads, other embedded contents are termed as non-necessary cookies. It is mandatory to procure user consent prior to running these cookies on your website.
SAVE & ACCEPT